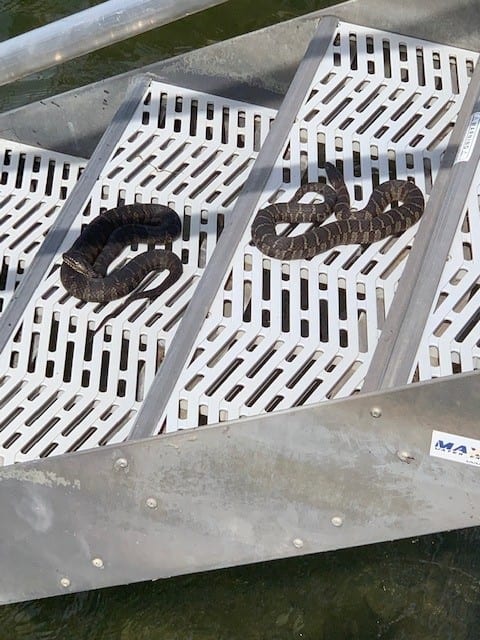 I am always looking for topics for blog articles and often inspiration comes in the form of, what I call, citizen concerns.  I recently received three inquiries regarding snakes, which I know nothing about. I decided if three people contacted me, there are probably a lot more people who also have questions or concerns.  So let’s talk about snakes.

To be clear, there is nothing new, surprising or concerning about snakes in the lake or on the shoreline.

Probably most people’s fear of snakes stems from the worry that they are venomous. Here are some GENERAL identifiers to tell the difference between venomous and non-venomous snakes:

Heads. Venomous snake heads are triangular and broad, with a skinny neck and fat head.  The reason for this is because the venom sacks are located under the snake’s jaw.  Non-venomous snakes have a steadily sloping jaw since they have no venom sacks. However, most non-venomous snakes will flatten their head and try to achieve the look of a venomous snake as a defense mechanism so this can be tricky to identify.

Distinctive swim pattern.  The venomous cottonmouth or water moccasin, swims with its entire body floating above the water while the harmless water snakes swim underwater and sticks out only its head above the water. There are some good youtube videos that show this.

More detailed description on how to tell the difference between cottonmouths and water snakes.  https://youtu.be/QKzWrFQQBaY

I contacted Indiana DNR Herpetologist, Nate Engbrecht, to get more information.  Nate shared with me that the only venomous snake documented from our area is the Eastern Massasauga Rattlesnake.  It is a rare species in Indiana that is listed as state endangered and federally threatened.  Cottonmouths (aka “watermoccasins”) are a southern species that barely reach Indiana at the southern edge of the state.  It has been documented at one or two sites in far southern Indiana and is exceptionally rare.  So the snakes you see in the lake are, in all probability, harmless water snakes.

Nate went on to say that most snakes will either flee or sometimes remain still when confronted.  Some will engage in defensive behaviors such as coiling, hissing and occasionally striking but this is more of a defensive behavior when it feels threatened rather than an aggressive behavior.  Typically, if you keep your distance then you won’t have problems with snakes biting you or coming at you.

In the words of Turkish author Mehmet Murat ildan “Snake looks scary for us and we look scary for the snake! Always try to see yourself from the eyes of others!”

I asked Nate what to do if you have snakes and would like them to go away.  He agreed this is somewhat tricky since the shoreline itself is a form of habitat for snakes.  General recommendations are removing items that snakes might hide under like trash or pieces of wood/logs and keeping the grass mowed.  This reduces habitat for the snake and its prey.  A nice tidy lawn to the water’s edge is in direct conflict with the recommendation to have a natural filter strip to deter geese and filter possible pollutants before they reach the lake.

I came across a website that gave some other recommendations that I thought looked interesting:

What Good Are Snakes?

Snakes play a role as predators of smaller animals like mice, frogs, slugs and insects.  They also serve as food for larger prey.  So in that regard, they are an important link in the food chain.

Fun Fact – but don’t try this at home!

Venom isn’t the same as poison–it can’t fry your skin or be absorbed through your stomach. It can only hurt you if it goes directly into your bloodstream via an open wound. If you swallow it, your stomach will simply break it down and it will be harmless by the time it reaches your blood.

But before you enjoy a tall glass of modified snake spit, remember that any kind of mouth sores or stomach ulcers are open wounds and are therefore gateways into your bloodstream.